Can you start by presenting yourself, your age, your training, your job, and where do you live…

My name is Tomas Mankovsky, I’m 30 years old, I’m a creative & director based in London, but I was raised and studied advertising and design in Stockholm, Sweden. I’ve been in London for 5 years now and for 4 of those I used to work as a creative at an advertising agency. Last year I resigned to dip in to the world of film-making.

What inspired you the movie « Sorry I’m late » ?

We were doing this job for Sony, a stillshoot. And there was a dog lying down on the ground and as we took pictures and weren’t fully happy with the positioning we adjusted the dog slightly and took another shot, and another. And as we looked through these shots one could almost see an animation being played out. And since I’d done one stop motion short before, I felt confident that this could work.

How long did it take you to make this movie, from the idea to the final touch ?

I was hoping to add another chapter (a shadow monster, that  you can see in the original story-sketch in the making of-area, on the website), but there was a marriage or something in the church we were shooting in on that friday, so rather than having 5 days, which was the original plan, we had to cut it down to 4 and strip away one part of the story.

When we had the material we needed to grade it and paint out a few bits and bobs, like a shadow from one of us that accidently popped up in a frame, or make the transition seamless from each day of the shoot (every morning we came to set to continue shooting, there was a slight change in light, so we stabilized it in post). This process however took ages, because we had no money the posthouse helped us out for free, and they could only work on the project when they had spare time, which meant it was waiting around in post for nearly 8 months.

Was there any major difficulty on the shooting ?

Everything was based on gut feel while we animated so I guess the first hours on day one was quite nervous, will we finish it in time? how will it all look like?

Simon, the actor, will he pull this off? etc. tons of questions and thoughts, but it all proved quite easy and straight forward once we started. There wasn’t any particular moment that stands at as I can recall. Perhaps the most difficult bit was dragging those props back and forth for 4 days, the back really starts to hurt after a while.But Simon did a fantastic job, lying on that floor for 4 long days in different weird poses. He’s ace!

Can you talk about your other films ?

I’ve made another stop motion film called Little Big Love. That was a £300 budget film I did entirely on my own to learn a bit about film-making. I read books about lighting sets, storytelling, camera-angles and setups etc. Then I got a chance in college to make an exam project about whatever I wanted, so I decided to make a film. The animation took 6 weeks, 7 days a week. I did everything myself and it was extremely educational. I even made the music score myself. I can really recommend this, the best way to learn film is by doing it.
I’m also finishing up another short right now, this one is live action, which has been great fun. It’s called The Duel and it should be finished in a couple of weeks.

What do you like in stop-motion, and in which kind of projects would you use this technique again ?

I like the simplicity of stop-motion. It’s a technique that anyone can have fun with and it’s so diverse and flexible, you can do magic in millions of different ways and always surprise and intrigue people. You know a lot of love has been put in to a project that’s made in stop motion and I respect that. There’s so much crap on youtube, someone might film himself eating lasagna. Sort of boring! But if the same person does the same action, but in stop motion at least some effort has been put in to it. And I like that. It’s not just point and shoot, one need to spend some time to craft it and while doing that new ideas can be born, the script can be refined, the shot perfected. The actual process of animating is very meditative. I’ve got no patience at all, so for me it was like a challenge. Try out stop motion and see if I could pull it off, I thought it was my worst enemy. But after making Little Big Love it all changed, I learnt to enjoy it, listening to good music for 7 hours, moving little bits around, thinking about life. Not bad at all..

What is your favourite animation movie ?

Difficult question. There’s so many good ones out there. I like Mark Osborne’s short MORE, the DVD is great with a making of-film and a lot of extra candy. I like Fantastic Mr Fox too, the animation is fairly basic but Wes Anderson’s art direction and script is amazing.

Can you talk about your next project(s) ?

My next project will come out in a few weeks time, The Duel. It’s a 4 minute short film for Diesel, and it will also be cut down to a music video. 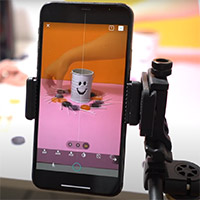